Grandpas in The War

Rebecca's parents are in town, and that means we get to be tourists! So we've spent quite a bit of time downtown and one of the monuments we saw was the WWII Memorial.

I've been there several times before, but I'd never been to the Information Booth off to the side. Well, as it turns out, there's a set of computer kiosks where you can search the registry of people who served in the war. I searched for Grandpa Knell and found this (taken by my cell phone): 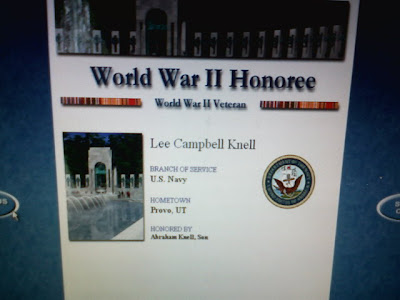 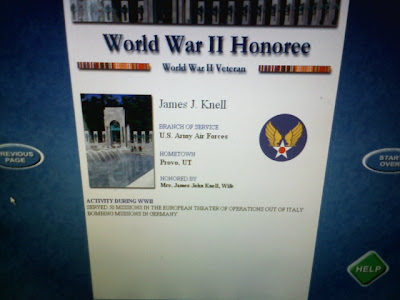 If you can't read that text on the bottom, it says: "Served 50 missions in the European theater of operations out of Italy. Bombing missions in Germany.

So I thought I'd share my findings and let you all know how cool it is to pay tribute to family member war veterans.
Posted by Unknown at 8:03 AM

I'll ask Nate about your bird dilemma...if anyone has an idea he might!

This was amazing to see this on your blog. I love that you were able to take a photo!! I love you guys !